Hello everyone! I hope December is treating everyone nicely...

We received quite a treat at my cheese counter today - 4 wheels of Rush Creek Reserve from Uplands Cheese in Wisconsin! 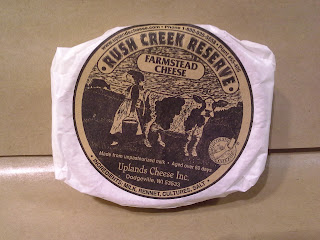 Needless to say, I had to purchase a wheel for myself so I could try it, share it with my team and then share the knowledge with you all. This is another example of a cheese that I have heard a ton about, but haven't had the privilege of tasting. When we heard there was a limited number available, my buyer and I jumped at the opportunity! 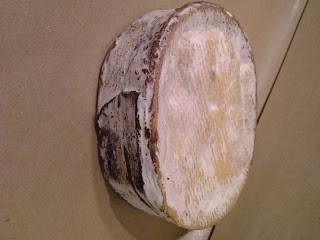 This is how the cheese itself looks like fresh out of the package. It weighs a little less than one pound, is wrapped in spruce bark and as an added bonus - made with raw milk. When I first unwrapped this cheese I was hit with a very woodsy almost floral scent from the spruce bark. To the touch, this cheese is very soft and I could tell right away that this was going to be quite a treat.

A little background on this cheese... It is inspired by the Franch Vacherin Mont d'Or which is also wrapped in spruce bark and made with raw milk cheese. Rush Creek Reserve is produced in a similar fashion as the Vacherin because they only use milk from the fall season as this is when their cows are moving from eating in the fresh pastures during the summer to eating hay in the winter time. Due to the nature of grass (very watery compared to hay) the milk that is produced when cows eat mainly grass isn't as rich or dense as the milk produced when the cows eat mainly hay (hay is solid and passes more solids to the milk). Rush Creek Reserve was created to really highlight the richer, creamier, delcious milk of the hay-fed cows. 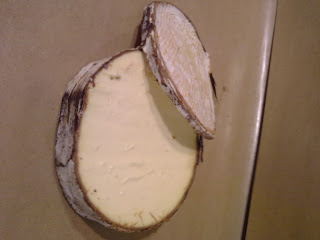 Now to the tasting... I highly recommend letting this cheese come to room temperature before serving. This ensures that you're able to taste all of the flavors of the cheese as refrigeration often masks subtle flavors. To serve, cut a "lid" off of the cheese (as seen above) and treat it like fondue. As I am a purist, I wanted to try the cheese by itself - so I got myself a spoon and dug in. The first flavors you get are the sweet woodsy notes that you smell right after you open up the cheese as well as a bit of saltiness. Then you get a nice creaminess along with the earthy, barnyard flavors that are seemingly present in all raw milk cheeses. This cheese has a beautifully long finish and the earthy, creamy flavors stay with you long after you've finished your taste.

Enjoy this cheese by dipping bread or fruit into it, or by spooning it over your potatoes or pastas. I personally just need a spoon and I'm in heaven...

Please note that this cheese is only released once a year and in very limited quantity. As I said at the beginning, my cheese counter only received 4 wheels and we now only have 2 left. If you don't get a chance to buy the cheese at my cheese counter, don't hesitate to snatch one up anywhere you see it because it won't be around long - and a year is a long time to wait... I hope you all get a chance to taste this cheese at some point, it really is a treat.

I'll be writing a new post in the next couple of days. We've received a lot of new and fantastic cheeses at my counter that I want to share with you. Stay tuned! Until next time, eat, drink and be happy!