I hope everyone's Holiday season was exceptional! Mine was fantastic. Lots of family time and super busy/fun days at work.

To help kick off the New Year, I had a Brie/Camembert tasting party for one of my Shootin' the Bries Meetups (http://www.meetup.com/Bay-Area-Cheese-Tasting-Meetup/). It was quite a success! This was the lineup: 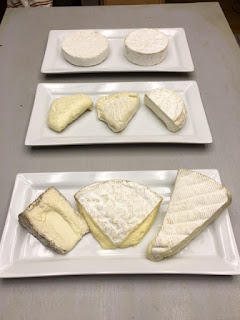 We started with the plate in front and worked left to right - Delice de Bourgogne, Brie de Nangis and Le Petit. I wanted to feature all cow's milk bries for the first plate and show how different cheeses of the same style and milk can taste. The Delice de Bourgogne was very buttery, the Brie de Nangis had a bit more earthiness and the Le Petit had a little more funk.

The second plate was the "non-cow's milk" plate... from left to right - Fromage d'Affinois Brebis, Fromage d'Affinois Florette and Camembert di Bufala. The Brebis was 100% sheep's milk and was a little on the ripe side, so it had the nuttyness attributed to sheep's milk, but a little more bite than a younger piece would have. The Florette was 100% goat's milk, super mild and definitely an "intro" goat's milk cheese. Not tangy or gamey at all. And the Camembert di Bufala made of 100% Water Buffalo milk was a crowd favorite with it's approachable lactic flavors with a hint of mushroom. Our 17 month old guest Lucia loved the Camembert di Bufala!

Now that I've gotten bit by the "bloomy rind bug" once again, I decided to feature a triple crème in my post today... 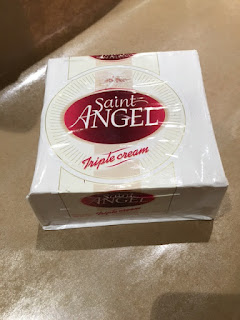 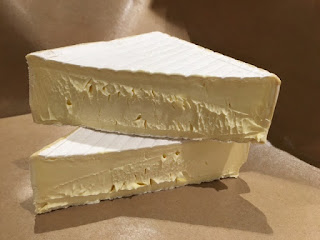 Yum yum yummy! I've always known that the Saint Angel and other Fromage d'Affinois cheeses from Fromagerie Guilloteau sold like hot cakes, but now I know why! After doing a little research, I found out about their "ultra-filtration" process they use in producing these cheeses. They actually remove a percentage of the water from the milk creating a more concentrated solution. They then add heavy cream to this thicker milk to reach a fat percentage of 75%. No wonder almost everybody I know loves this cheese! 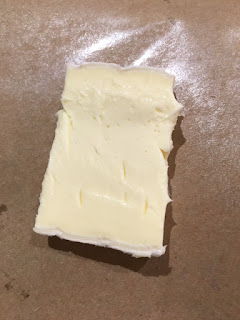 The Saint Angel definitely falls into the "buttery" brie category. The rind is very thin and does not pass on much bitterness. If you let the Saint Angel ripen a bit, you'll get an ooey gooey cheese that will spill out once cut. The one that I cut open today was a little on the young side, but still creamy and delicious.

One of my favorite things to do for a special treat is to take a hunk of the Saint Angel and pour some Amarena cherries in heavy syrup over the top. It's pure bliss! Throw some sparkling wine and some fresh berries with it and you've got yourself a Valentine's Day treat sure to impress your cheese loving Valentine. On that note, I will leave you salivating... until next time, eat, drink and be happy!
Posted by Leah McFadden at 7:53 PM